It is my pleasure to welcome you all to Áras an Uachtaráin and, for those of you who have travelled from abroad, to Ireland. May I thank Jim Doolan and Olga Bennett, of the Irish Association of Former Parliamentarians, for facilitating your visit here this afternoon. As a former parliamentarian myself, honoured to have spent over three decades serving in the Irish National Parliament, I have the greatest respect for the work that parliamentarians perform, for their practice of debating, differing, and reaching accommodation on the important issues that shape our public world. I am delighted, therefore, to have this opportunity to meet you.

I understand that this is the first biannual meeting of the Bureau of the European Association of Former Members of Parliament to be held in Ireland, and the theme you discussed this morning in the Seanad Chamber – i.e., the Future of Europe – is one that is of fundamental importance to the shared future of all the countries you represent. Indeed it is one of the central political questions of our time.

Your visit to Ireland comes, of course, at a moment of unprecedented internal and external challenges for Europe. That which seemed inconceivable only yesterday, the unravelling of the European Union, has become thinkable, brought home to us by the thunderbolt of the British decision to exit the Union. Communication, and more alarmingly still, trust, between the peoples of Europe and their institutions is endangered.

We know that, unless decisive political action is taken, unless we create the conditions for a thorough moral and intellectual awakening, the European Union might well perish, and with it a certain idea of Europe – one that is rooted in a spirit of peace, cooperation and solidarity beyond national borders.

For all the gravity of the multiple crises currently facing our Union, it remains my profound conviction, however, that, provided it recaptures the affection and trust of its peoples, a strong and united Europe continues to be the best answer we have to offer to the great challenges of this century, from unfettered financial speculation to climate change or indeed security threats, of which the horrendous attack on London Bridge last week was but the latest demonstration.

Yes indeed, European unity is the best chance we have of shaping the global agenda on all of those new realities that touch and disrupt the daily lives of our citizens. That is the demonstration which all of us who call ourselves Europeans need to make, in practice and in public discourse. That is the great collective task we must tackle, without delay, without getting bogged down in political and economic  fire-fighting, but with long-term vision, and having at heart, throughout, the hopes, the fears, the vulnerabilities and the immense potential of the millions of women, men and children whom our Union of European nations is here to serve.

Parliamentarians, as the elected representatives of those women, men and children, have a crucial role to play in that process. I would go so far as saying that the challenges we face call for a reassertion of the relevance of parliaments, their discourse, and their role in policy formation. This holds true in all matters of public interest, from foreign policy to economic and fiscal policy.

As for the first realm, I strongly believe, as I argued in my Address to the Parliamentary Assembly of the Council of Europe, two years ago, that parliaments can and must hold governments accountable for what is said and done, or not said and not done, in the wider world, in the name of their citizens.

Economic and social matters must, similarly, be reclaimed as another essential area for proactive parliamentary activity and discourse. It is not enough to respond to the contemporary crisis of democracy, in Europe and beyond, by resorting simply to formal measures and procedures aimed at increasing transparency and the probity of the political personnel. Those issues of transparency and probity are very important of course, but we must go further. Genuine accountability can never be reduced to a procedural matter; it also has to do with power, its distribution and the effectivity of its exercise by the people and their elected representatives.

Is European democracy not endangered when, for example, that power is leeched from parliaments to unaccountable global financial markets and rating agencies, whose orthodoxy and modes of action are predicated on abstract, de-peopled principles? In the highly complex, fast-changing and globalised world of this early twenty-first century, the challenge facing our national and European parliaments is, I believe, that of finding new ways of claiming back competence, legitimacy and political traction over realities that largely exceed national boundaries and jurisdictions. That is, indeed, a highly complex, if not daunting, challenge. Yet, it is an ambition that cannot be surrendered.

Parliaments matter hugely and they must continue to matter. Centuries of effort have been invested by European citizens in securing the vote. It is to their elected representatives that citizens look for accountability, for opening up new collective possibilities lodged in a variety of policy options, and for connecting them to wider horizons through their work in regional fora such as the European Parliament, or in international, multilateral institutions. Can we let go these hard-won advances? Have we considered the consequences?

As Jürgen Habermas, the eminent German philosopher, has reminded us, without the constant exercise of public deliberation, and without citizens being enabled to submit their arguments to rational disputation, democracy itself will not survive. Parliaments must continue to play a central role in preserving and enlivening the public world that lies at the heart of European democracy - that essential space shared by citizens who must be free to debate in an open and pluralist manner, whose children must be enabled to imagine alternatives to the ideas and practices that govern our present circumstances, in Europe and in the wider world.

Parliamentarians have a most valuable perspective to offer to any holistic response to the contemporary crisis of democracy. Everyday, on the streets, in their clinics, they encounter the hopes, the achievements, but also the feelings of insecurity and precariousness experienced by their fellow citizens. Those are the voices, dear friends, that must be at the centre of any discussion on the future of Europe. And your voices, too, your experience and your perspective, as former parliamentarians, must be a part of that debate.

The voices of the European street are loud. We must listen to them, and respond not by adjusting what is failing, but by offering a vision based on the solidarity of all citizens in all Member-States going forward together. Let us, then, approach the multiples crises currently facing our European Union with creativity, political courage and a renewed commitment to the demands of representative democracy. Let us acknowledge the current loss of trust on the European street by rebuilding the democratic pact between European citizens and their institutions, with a positive regional invitation that is in fit with future global realities and necessary reforms.

Indeed what better solution than a united Europe do we have to offer in responding to the great collective issues currently facing us? Which alternative means of cooperation do we have at our disposal that would enable us to meet effectively the global environmental challenge, the challenge of development, the challenge of demography and large-scale migration and, also, yes, the challenge of democracy, in a context where we are witnessing the rise of so-called "illiberal democracies" and increasingly emboldened transgressions of the rule of law both inside and outside the EU? What better response do we have to offer than a stronger European Parliament, and closer coordination between our national parliaments, to voice the aspirations of the peoples of Europe and give shape to our shared future?

We are, dear guests, at a moment when a new departure is required for our European Union – when a new departure is possible. The time has come to craft new policies, grounded in new connections between ethics, ecology and economy. The time has come to gather our strength and unite our efforts, not to break up the edifice painstakingly built by generations before us. The uncertainty of our global environment will not disappear through the wave of a magic retreat behind national borders. No border, no great wall, has ever stopped the spread of pandemics, the flow of migrations, or indeed global warming. Neither should we, Europeans – who represented a quarter of the world population in 1900, and will account for a mere 5% of it by 2060 – mistake the end of our world for the end of the world.

Let us, if I may invert the words used by Pope Francis in his address to European leaders, in Rome last March, learn to use our wings again and elevate our gaze. Let us recognise those new realities that will shape our future and respond to them in concert, in a spirit of intellectual honesty and openness to contradictory debate. Let us continue to build on the shared experience we have garnered through decades of shared institutional and legislative practice, let us take further the tools of cooperation and solidarity we have created together, and the ability we have developed, in the transnational forum that is the European Parliament, to look at any issue of common interest from different angles, through the eyes of other nations.

[Cooperation is the key, not fragmentation. A united Europe, and not a cacophony of competing voices, is our best chance to shape the global agenda, to infuse it with the values we cherish, to make it more hospitable to dignified human life, and to life in all its form.] 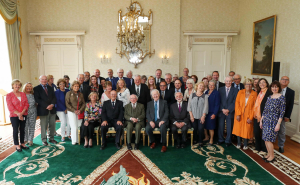