For too long, empty pledges and fine words have died in our mouths – now is the time to turn promises into action for this generation.

It is the initiative of Secretary General Ban Ki-Moon which has gathered us all here in Istanbul. Through his report Agenda for Humanity, he has made a moving appeal, in the final year of his office, to the leaders of the world to turn words into action, to move beyond describing, again and again, the great suffering, the loss, the diminished lives of so many members of our shared human family.

I know that he is reflecting the views of so many on our fragile planet. As heads of State or Government, we must be aware of all those women, men and children who yearn for, even weep for, a United Nations that would be supported, resourced and enabled by its members beyond any competing set of narrow interests, to act decisively against the interrelated issues of global poverty and hunger, conflict, climate change and their ensuing displacement.

To achieve the changes which the Secretary General calls forth requires much more than any re-statement of aspirations. It requires a profound and integrated rethink of international politics, and of our theory and practice of economics, development and trade; it requires a reform of the representational structures of the world’s peoples; and indeed it demands little less, I suggest, than a new paradigm of thought and action, grounded in a reconciliation between ethics, economics, ecology and cultural diversity.

“Leaving no one behind” is the humanitarian imperative and the central commitment of the Sustainable Development Goals. It is also, rightly, one of the Secretary General’s five Core Responsibilities in his Agenda for Humanity.

For too long, empty pledges and fine words have died in our mouths – now is the time to turn promises into action for this generation.

So, let us honour those who have worked so hard to prevent, reduce and respond to conflicts, who have helped pick up the pieces in a broken world, but let us not shrink from the reality of the deep political and intellectual failures, with which we must deal, from which we must depart.

This is our opportunity to restore hope, to demonstrate the relevance of our multilateral system, our capacity and our courage. This is for us a moment of truth, a moral test.

Let us then not seek evasions. Let us strive to realise the great promise of security, prosperity and human flourishing that can flow from a comprehensive and positive shared global solution to the great challenges and the great opportunities of our times. 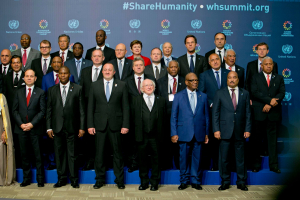